My granddaddy ate syrup and biscuits almost every morning of his life that lasted for 90 wonderful years.    Cane syrup was his favorite.   He’d sop up the thick, rich, dark amber liquid with a hot biscuit and  declare, “That Top O’ The World sirp sho’ is good.”   Early in my life, I had the notion that syrup and biscuits represented something very good.  That’s exactly what I want “Syrup and Biscuits” to represent.  Goodness.  Just simple, honest, unpretentious goodness.

Some of my earliest food memories are of breakfast at my grandparent’s house.  Regardless of the day’s events, a good hearty breakfast was going to be in the plans.    A consideration was never given to a throw-a-poptart-in-the-toaster-and-eat-on-the-run sort of breakfast.  Sometimes before sunrise,  the hearty aroma of bacon, sausage or ham would engulf their tiny three room house.   As soon as the aroma snapped you to your senses from a deep sleep, then you would hear a cacophony of sounds:  the crackling of the pork of choice as it sizzled in the hot black cast iron skillet, the shuffle of feet against the linoleum kitchen floor, the clinging of plates, the conversational voices.  That little kitchen was a beehive of activity.   Once my senses of smell and sound had been intrigued, I couldn’t wait to experience the sight.  Waking up was never hard.  It was a pleasure.

We would gather at the enamel table under the single pull down light with no light fixture.  Granddaddy would bless the food.  As food was being passed around, Granddaddy’s coffee would be “saucered and blowed”.    A recent discussion on Vintage Vera reminded me that I needed to write a story about “saucered and blowed”.  Long ago, when people had to boil their coffee, it would be so hot they couldn’t drink it.  They would pour the coffee into a saucer and blow it to help it cool down.  This practice never left my granddaddy even after they got fancy and had an automatic coffee maker.  He would make a loud slurp as  he sipped the coffee from the saucer.  Highfalutin people would call this rude and ill-mannered.  I call it smart especially since I have learned to love coffee and savor that first cup of the morning.   I want to drink my coffee as soon as the black gold hits my over-sized coffee cup and I get my half-n-half and honey in it.  It would make me ill as a hornet’s nest if I had wait around for the stuff to cool down enough that it wouldn’t take the hide off my tongue.

This morning’s breakfast made me relive those mornings in my grandparent’s kitchen.  The memories were so vivid, I almost saucered and blowed my coffee just for old time’s sake.  With leftover Easter ham, I fried it up  and made red-eye gravy.    That  gravy was a staple on my grandparent’s breakfast table.  Granny would save whatever leftover gravy she had, store in the refrigerator and that would be the starter for the next morning’s gravy.    The gravy was always served in a certain little white glass bowl.  That bowl was always on the table.  I feel like we grew up together.   It’s not fancy.  No one else would probably pay it any attention but it’s as closely tied to my childhood as blackberries in the summer.  And the very best part about that little white bowl:  I have it! 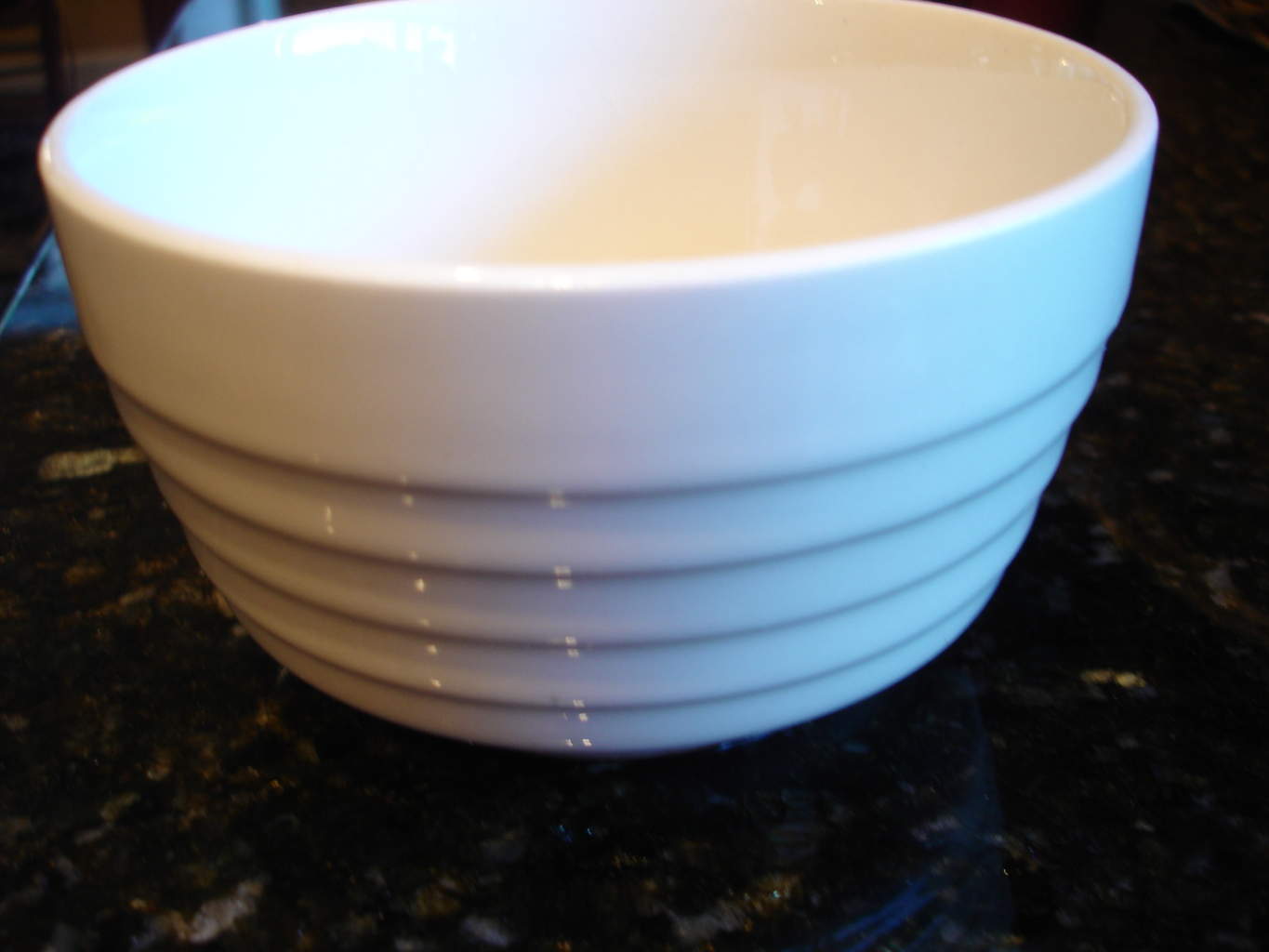 In my kitchen this morning with the white gravy bowl, the fried ham and red-eye gravy, I felt like my grandparents were here with me.  As I poured the water and coffee into the iron skillet after the ham had been taken up, I held my face over the steam that arose and just breathed it in.  That smell was so familiar and so comforting.    Before I poured the hot gravy into the white bowl, I tempered the bowl with hot water….just in case.  This bowl is probably older than me.  I don’t ever remember my grandparents not having it.    After pouring up the gravy, I just sat back and admired the little white bowl in it ‘s resplendent glory. 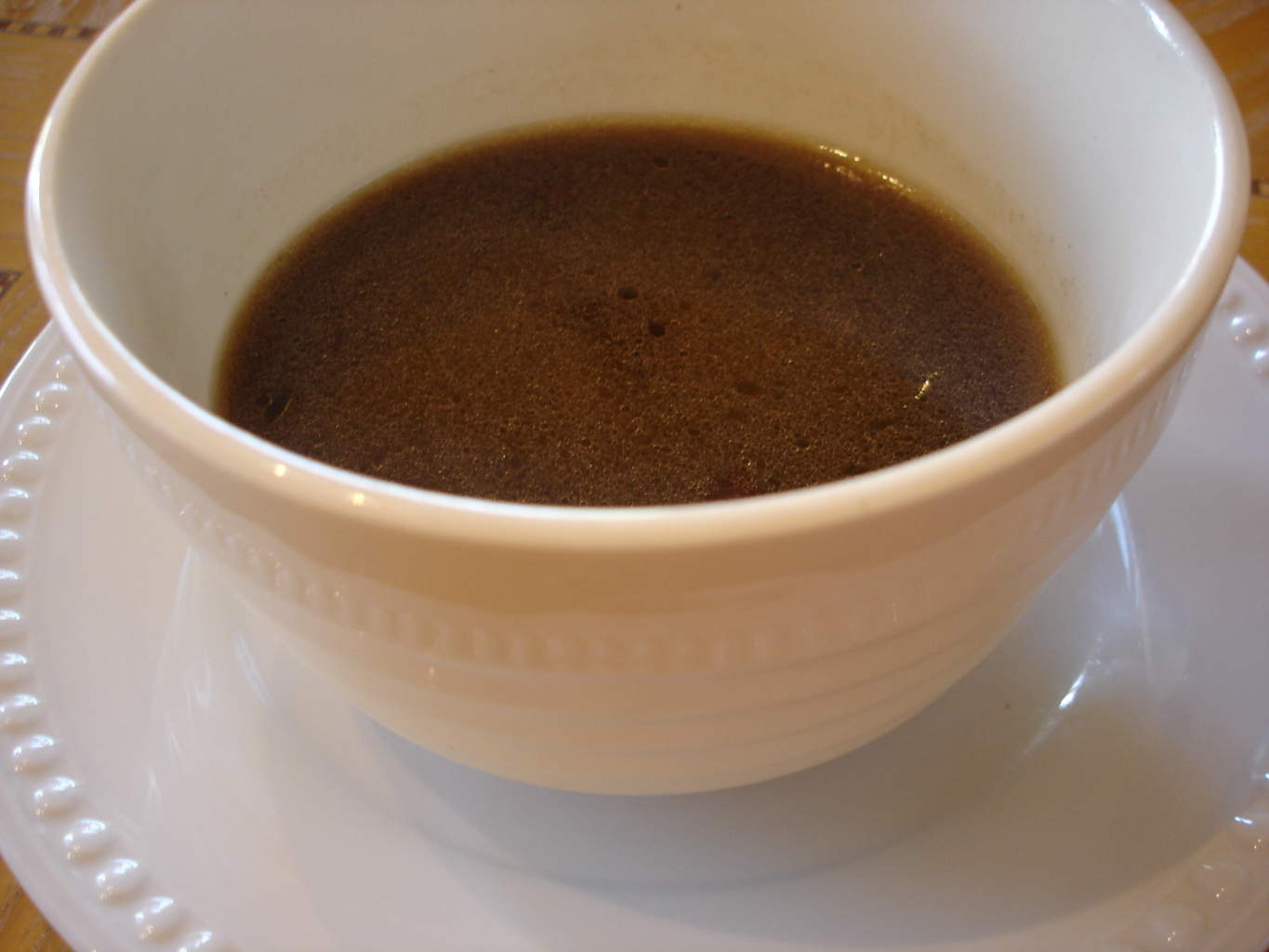 As I enjoyed my breakfast of  browned ham,  bold gravy and creamy grits, I reflected on why I write Syrup and Biscuits.  That little white gravy bowl containing the red-eye gravy  told me everything I need to know.

I think fried ham has gotten a bad reputation for being full of saturated fat and unhealthy.  Hams, in general, are leaner and healthier than they have ever been.  Fried doesn’t mean deep-fried. I just coat the bottom of a black cast iron skillet with some olive oil.  Once the skillet  is good and hot, I add the ham and cook on both sides until it’s nicely colored.  This is how it should look. 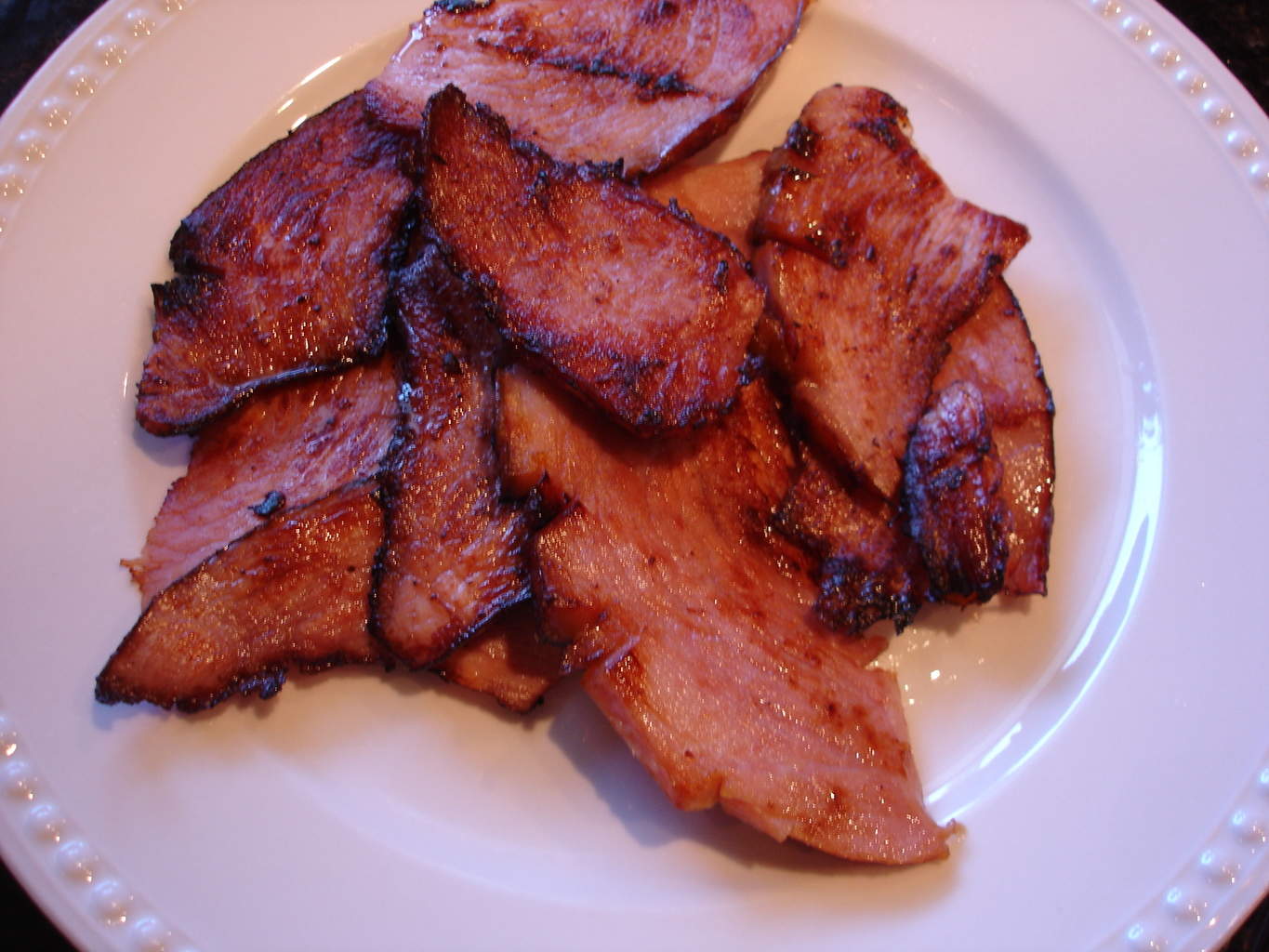 After the ham is removed from the skillet,  add 1/2 cup water and 1/2 cup black coffee.  Keep scraping the bottom of the skillet to make sure that all the bits and pieces are scraped up.  You want that to flavor the gravy.   Reduce by one half.   I added just a teeny bit of honey, maybe 1/2 teaspoon.  The coffee I used was pretty strong and tasted a tad bitter when it was reduced.   Pour into your favorite gravy bowl or pitcher.   Serve hot with fried ham, biscuits, grits and eggs for a might fine breakfast.    This is how grits and gravy look…in case you were wondering. 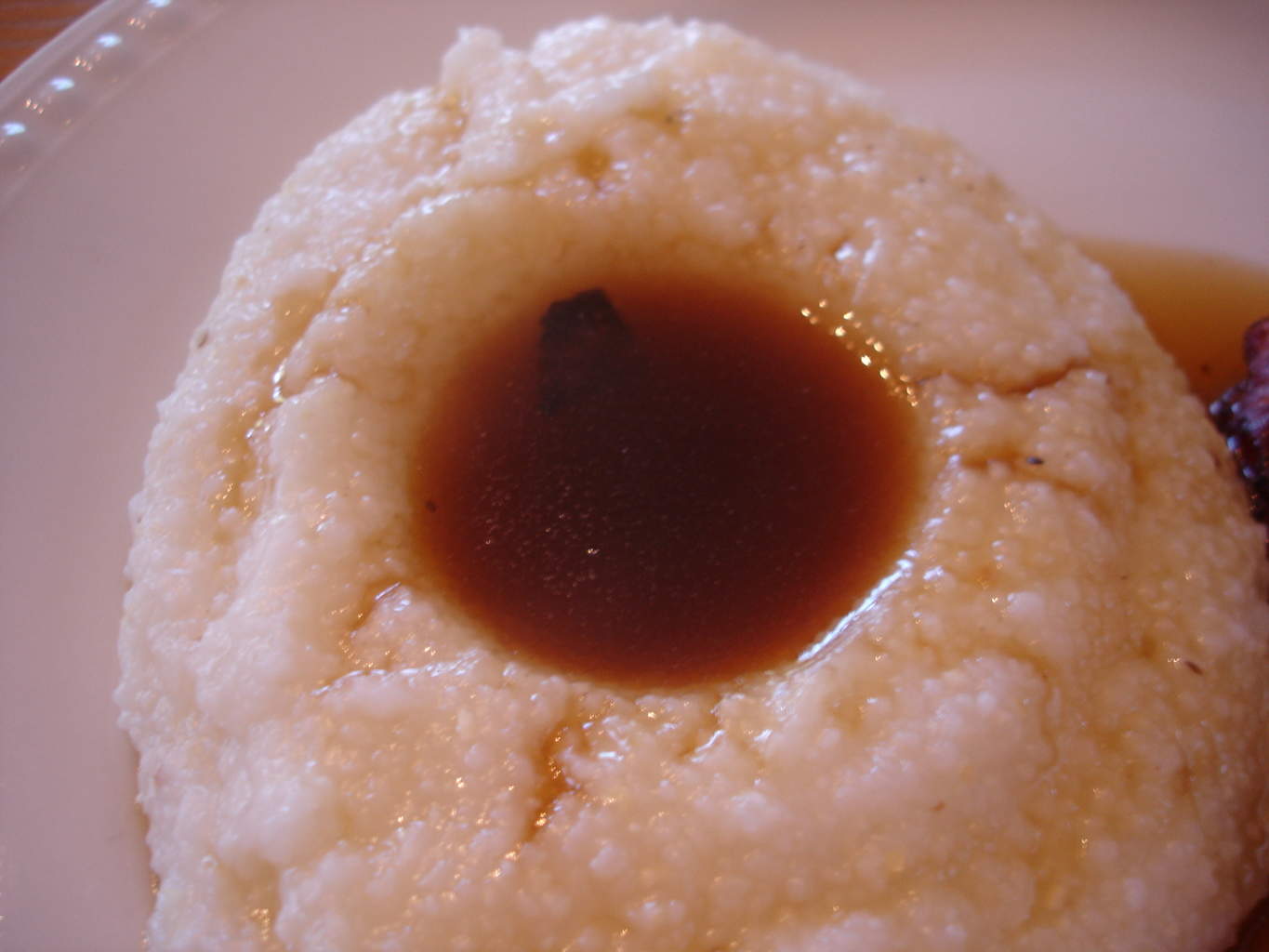 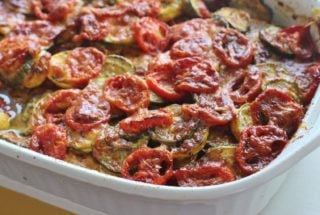 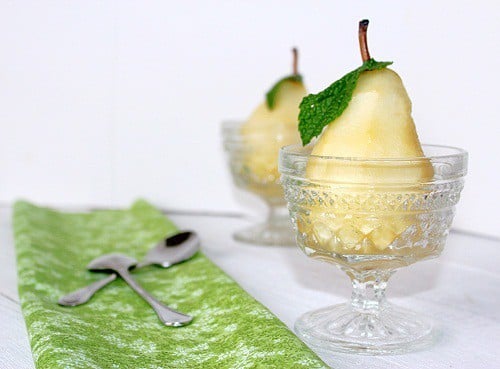 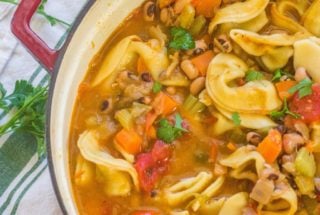 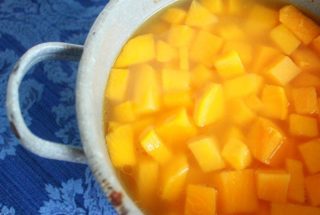